Serbia is situated in the center of the Balkans, on the most important roads, which connect Europe and Asia, and cover the territory of 88.361 square kilometres.

The length of the borders is 2.397 kilometres. In the east it borders upon Bulgaria, in the northeast upon Romania, in the north upon Hungary, in the west upon Croatia and Bosnia and Herzegovina and in the south upon Albania and Macedonian.

Serbia is the crossroads of Europe and is a geographically and politically important territory.

International roads and railways, which pass down the valleys of its rivers, are the shortest connection between Western and Central Europe, on one side, and Near East, Asia and Africa, on the other side.

Serbia is in CET- central Europe time zone (GMT+1hour). Summer time is from the end of March till the end of October (GMT+2 hours). 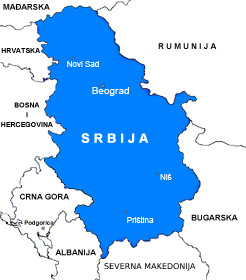 North Serbia, Vojvodina, is mostly dominated by plains, while Central and South Serbia are hilly and mountainous.
Out of 15 of the mountain peaks that reach the height of over 2.000 meters, the highest is Djeravica on Prokletije (2.656m.).
Serbian rivers belong to the basins of the three seas- Black Sea, Adriatic Sea and Aegean Sea.
Three of them are sailable: Danube, Sava and Tisa.
The longest is Danube.
Its total flow is 2.857 kilometres and it flows 588 kilometres through Serbia.

The climate in Serbia is temperate and continental with nuance between the four seasons.
Summers are hot and winters are cold and snowy.

There are 7.478.820 inhabitants in Serbia (not counting Kosovo and Metohija).
Serbs make 66% of the inhabitants, Albanians 17%, Hungarians 3.2% and then there are the Romanians, Roma, Slovakians, Croatians, Bulgarians, Turks, etc.
The population is mostly of the Orthodox Christian faith. However, there are other religious communities: Islamic, Catholic, Protestant, Jewish, etc.

In Serbia we use Serbian language of aekavian and iecavian pronunciation. It belongs to the group of south Slovenian languages and it is most similar to Bosnian, Croatian and Macedonian languages. A great number of our words are of a foreign origin, mostly Turkish and German, but today there are more and more anglicisms. Serbian language consists of 30 letters and two alphabets - Cyrillic and Latin characters. What makes it unique among other languages is a simple rule by which it is written and read: one letter for each voice and vice versa. You will mostly meet Latin characters, but the names of the streets and the information at the bus and railway stations and at post offices are written in Cyrillic. Therefore, it would be very useful if you learned the capital letters of Cyrillic, at least. Most of the young people speak English, less German, French and Russian, but Spanish and Italian are getting more and more popular, every day.

They say that nobody who went inside came out the same person. Did they meet the 'little green p ...

More...
Prijatelji sajta
HIGHLIGHTS IN MAY