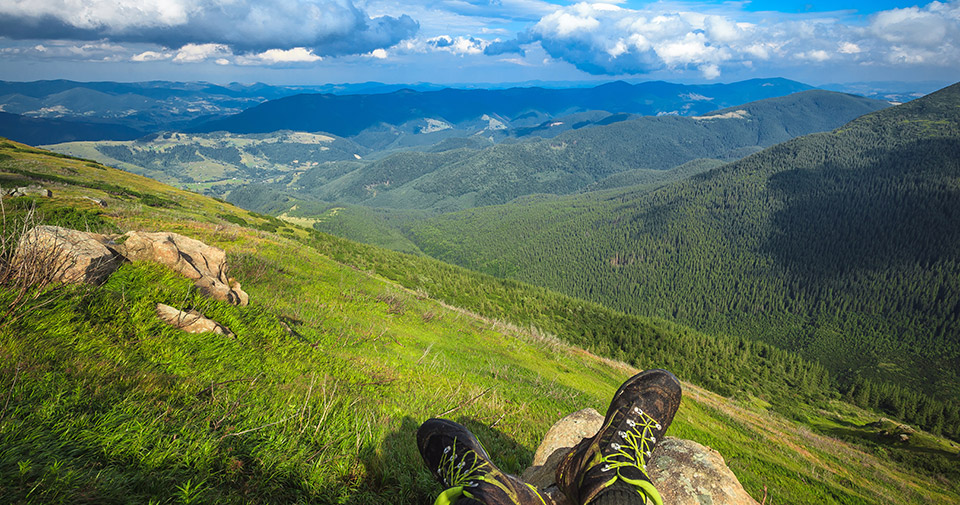 His mountainous majesty Rtanj: The enigmatic titan shaped by nature and mythology

They say that nobody who went inside came out the same person. Did they meet the 'little green people', or did they - as the man from Greece from about 60 years ago - teleport around 100 years into the future under obscure circumstances? It's hard to say. And even harder to believe.

There are many tales of why this place is so special. In Serbia, the Balkans and around the world. An inexperience (adven)tourist might shyly ask what they're actually in for. And how much the tales are a product of suggestion or actual experiences.

Rtanj happens to be one of the leading locations in terms of legends and myths that test our skepticism. It was brought to public attention by the famous Mayan calendar. Due to the quite literal way it was interpreted, there was an unprecedented number of reservations under Rtanj due to the hope that the individuals who happened to be there when the apocalypse struck in 2012 would be saved.

This is why this mountain's mythology is so difficult to de-mystify. It built up for decades in the national and collective subconscious, creating a certain archetype of their own. In addition to curious souls and mountain climbers, scientists and academics, Jews and teleported Greeks, aliens and jealously guarded treasure troves all had their time on Rtanj. Esoteric universes were broadly and lengthily discussed. Seeing how the mountain is vaguely pyramidic in shape, there were speculations that you could traverse its labyrinths. Alas, facing the powerful energies of this place has long since sealed the entrances, so the only adventure we have left is the one of climbing it. As far as we know from non-mythological sources, the little green people have not (officially) abducted anyone yet, or at least they returned any abductees fairly quickly. Many claim to have been healed by the forces of nature so Rtanj tea has become the local and global brand.

At a crossroads between science, myth, history and legends

The nature and mysticism or Rtanj overlap enough to make this a must-visit location for any adventurer. Rtanj continues into the Carpathians between Sokobanja and the flatlands near Boljevac, surrounded by the villages of eastern Serbia. Still, the three-pointed mountain made many wonder - can natural forces really shape a mountain with so much geographical precision? If not, who and made these calculations and how? And why do they seem to correspond to random locations around the world?

Science joined mythology and established that the angles of Rtanj match the angles of the Great Pyramid of Giza, while the angles of the slopes exactly match with the Mexican Moon Pyramid. By climbing towards the peaks Baba, Kusak and Siljak, the math gets even crazier. If you connected the three peaks with an imaginary line, you'd make the perfect triangle.

It's similar with the branching edges that range from the top down of the mountain. Measured down to a millimeter, the length of each one is precisely halved. The tallest peak, Siljak, with its 1565m hides underneath itself a cavity with a straight rhomboid base.

The geometrical mathematical phenomena continue on descent as well, giving weight to the claim that Rtanj wasn't shaped naturally. In addition to the enigmatic circles near the base that are said to recharge the human spirit, speleologists have (somewhat) figured out the mystery of the inner chambers, labyrinths and 17 underground caves. There have also been discoveries related to the strange experiences that the visitors have reported: ranging from inexplicable healing to their technological devices acting up. Special instruments have detected that the secret lies in the electro-magnetic and bio energy radiation so the energy fields of Rtanj constantly shift.

The radiation is strongest at the bottom of the mountain in the place called "Svetiliste" (hallowed ground). The claim about the strongest energy flow in the world is also connected to Rtanj. The British explorer and writer Arthur Clark called it 'the bellybutton of the world'. In addition to the healing radiation, it also has a beneficial influence on the health and it is home to many kinds of rare and healing herbs. 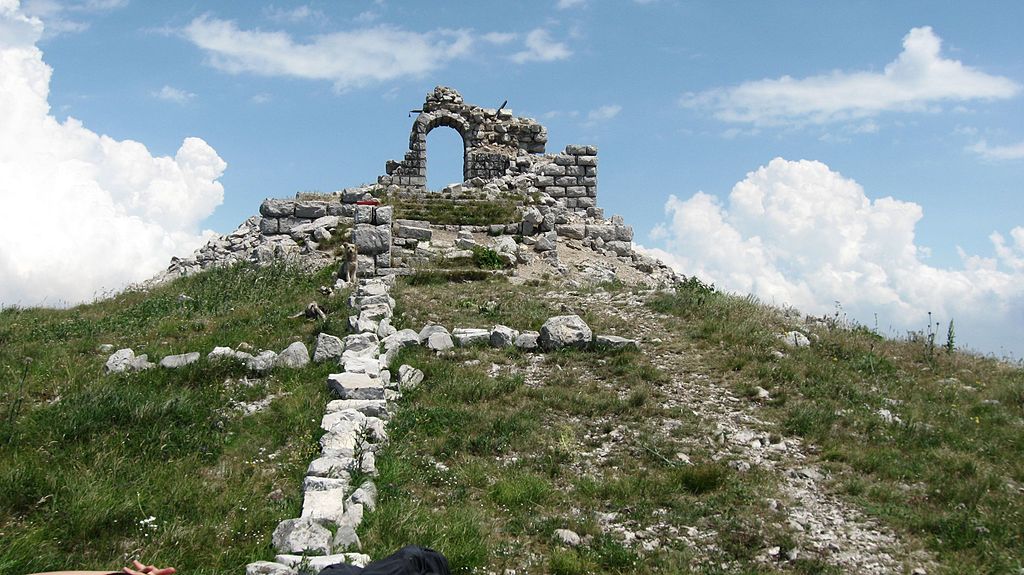 It's not hard to conclude why this place has a 'different energy'. Still, an encounter with it could leave a different impression. Settling into the Rtanj ambiance is almost imperceptible and instantaneous: the moment you lay eyes upon the view, all the rumors fall out of focus and fade away. In that immediate moment, despite the tales told about it, Rtanj remains a bit mute and proud.

In addition, it allows anyone to attempt and conquer his peaks. Scientists are joined by recreationalists, mountain-climbers, hunters, hikers or tourists who are determined to enjoy the view from the peak. With remote villages and curving roads far below, Rtanj makes you think that the entire vista can fit in the palm of your hand.

It's understandable that coming back from this paradise to your usual environment - in a city for example - could be disenchanting. Certainly, the climb depends a lot on the physical shape of the climber. Recreationalists and hikers might want to approach from the East or West side, while the more experienced people come up from the North. Nature has seen to it to shape the mountain with a lot of diversity. Ranging from steep and milder slopes to stony sections and pastures, as well as forested, rocky or barren paths.

History left its mark on the tallest peak. There are remains of an old church that was a foundation by the Jewish family Greta and Samuel Minch - hardworking locals who revived the Rtanj area between centuries.

As owners of the nearby mines, the family provided all the necessities for their workers: ranging from an ambulance and trade shop, to a cinema, private school and beautiful parks. Greta especially, with her care and hospitality, won the hearts and respect of all the locals. After her husband passed away, she wanted to build a church in his honor, dedicated to St. Gregory. One thousand workers then climbed Siljak and, bringing together Christianity and Judaism, constructed a building in the style of Jewish synagogues.

This event also didn't go by without its anecdotes. One of them states that Adolf Hitler himself, who supposedly visited Rtanj in 1934. The enviable wealth of the family was no secret, but it has been speculated that they kept it well hidden from the Germans. Believing that the Minch's used chambers under the church as storage, treasure hunters would often visit it, dynamite in tow.

But of course, they'd end up disappointed, leaving empty-handed and depriving Rtanj of an important cultural monument. 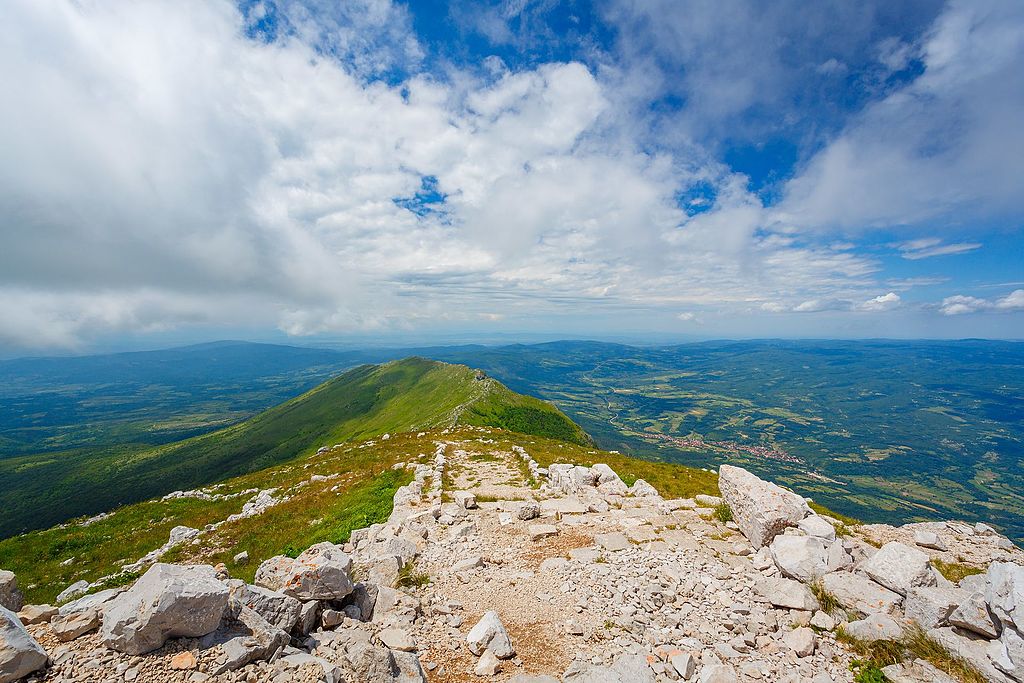 The unofficial history of the Serbian Olympus

Unlike factual stories, there were many questionable tales woven throughout history - such as the story we mentioned at the start, about the teleporting Greek man.

He was encountered by Germans while they were occupying Rtanj during WWII. The Greek introduced himself as a lost shepherd from the 19th century who, as he claimed, went to get his flock of sheep around 100 years earlier and somehow ended up in Rtanj in the present time.

If legends are to be believed, he managed this feat by unknowingly going through a time portal. To this day, nobody has figured out where this portal might be.

Those who had met the teleported shepherd claimed that his story was recorded into accounts from his hearing. But these records were never actually found. Even if he had truly walked the slopes of Rtanj, the Greek must've come up with some insanely creative tactics to escape German captivity.

And believe it or not, it gets even stranger. In addition to the teleport, which they never located, Rtanj supposedly has another special and so far unlocated "Golden gate". It's supposed to be one of six such gates in the world and is said to lead to an even more mysterious star Sirius.

This might also be the origin of testimonies on strange sounds and aircrafts which are said to occasionally visit Rtanj. Neither logic nor science have managed to explain these occurrences. Only one thing is known for sure, which is that what Mount Olympus is to the Greek, Rtanj is for the Slavic people - a mountain of extraordinary beauty that never stops winning the affections of the entire world. As for the authenticity of many claims related to it, the truth is - as always - somewhere in-between, where subjective impressions meet realism, creating a mute, earth titan that Rtanj is.