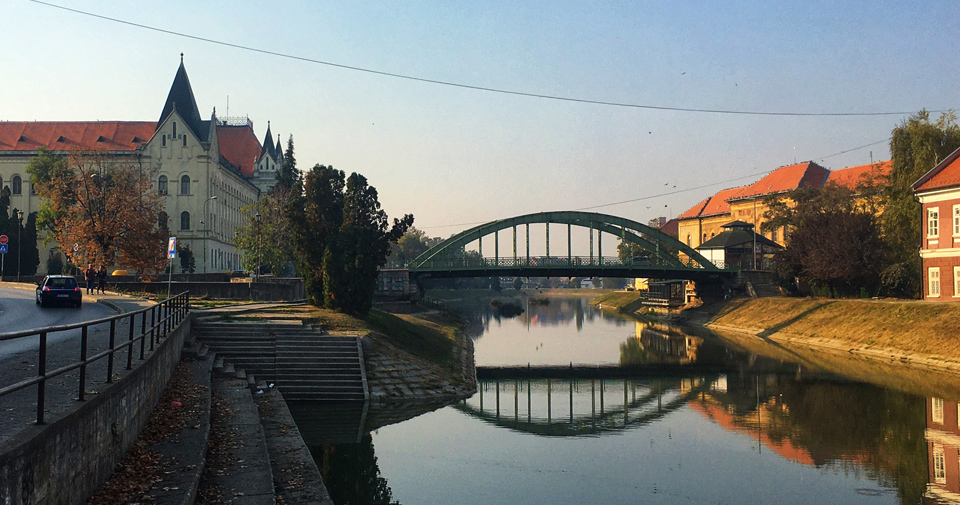 Once considered “the ugliest construction in Paris” and today a famous symbol of the city, the Eiffel Tower was constructed at the end of the 19th century following the designs of French engineer Gustave Eiffel. This is a story we all more or less know.

What many don't know is the stories of Eiffel's designs used to bridge across Serbian rivers with their steel constructions.

The bridge from a poem

The story about Eiffel and Serbia begins somewhere between fiction and reality at the start of the 20th century in Veliki Beckerek - today known as Zrenjanin. It was a time when this town was the center of Banat's economy and factories were popping up one after the other alongside the river Begej's coasts. History records state that during the first decades of the previous century Zrenjanin had over 40 factories, including sugar, furniture, agricultural, confectionery, macaroni and oil factories among many others.

In their desire to bridge the river and connect the rapidly developing center of the city with the Amerikai városrész settlement - today nicknamed 'little America' - the town officials ordered two bridges to be constructed across the river to replace the old wooden one that the town had been using up until then, ever since 1807.

There is a story related to the larger of the two bridges - the Beckerecka cuprija - that says that the project for its construction was created in the famous Effel's buerau. But sadly there is no solid proof for this clame so this story is widely disputed to this day.

What is known for a fact is that the bridge was cast in the Romanian town Resice, from where it was delivered in parts all the way to Zrenjanin. It is also recorded that at its time it was one of the most imposing bridges in Banat, which drew attention with its rosettas and geometrical decorations that were skillfully woven into the steel construction cage. Experts believe that this unusual design which was characteristic for the Parisien tower was the source of the rumor that Eiffel designed the bridge. This bridge ended up so famous in fact that it was mentioned in national folk poetry as well.

Having been immortalized in poetry, the bridge survived two wars and several states that owned it, but eventually fell victim to progress. In 1969, based on the decision of SO Zrenjanin, the bridge was taken down, even though both the townsfolk of Zrenjanin and the general public were against this decision. The dissatisfaction with this decision was so great that there were criminal charges pressed against the town's mayor at the time. But sadly even this failed to save the bridge - it was deconstructed and in its place arose the great pedestrian bridge in 1971.

Today a group of enthusiasts who promote the recovery and restoration of the former symbol of the city still preserve the memories of 'Beckerecka cuprija'. The smaller bridge still stands connecting the shores of the artificial lake that formed after the Begej offshot was obstructed.

The search for Eiffel's accomplishments continues through the mild flatlands of Vojvodina where 10 years earlier and around 40km apart we had the boat transfer near Becej. Unlike the Beckerecka cuprija, this transfer known as Slajz is a bit more famous.

It was erected between 1895 and 1899, as part of the great canal of Backa, that came before the Dunav-Tisa-Dunav system. In order to construct this colossal project, the first sailing route in Europe, the Hungarian noble and engineer Joseph Kisch was contracted. Intending to regulate the course of Tisa river and prevent flooding to the city, he relocated the canal's influx from the Backo Gradiste to Becej and constructed the ship transfer.

The construction project itself was entrusted to the young engineer Heinz Albert, but to this day there remains the rumor that the project was actually constructed in the Paris buerau of the famous Eiffel. Reasons for this claim are found in Albert's own lack of experience at the time, seeing how he was only 24 years of age when he worked on the project and the construction itself which was very reminiscent of the steel constructions of the famous Eiffel Tower.

At the time of its construction Slajz was a marvel of technology. It consisted of three gates made out of solid materials consisting of brick and predecessor of concrete which bore the magnificent steel construction. With its impressive size which amounted to 16m width and 70m length, this was the largest known dam of this sailing route.

Slajz had another unusual feature. It was the first ship transfer whose gates were activated with electrical energy. In order to power the lowering and raising of the gates, a small hydro-energy plant was constructed nearby. Thanks to this central Becej got its first light bulbs as early as 1913.

Due to its ingenious construction and technological advancments, this transfer attracted a lot of attention. Even so much that the Japanese government had supposedly sent over one of their engineers to study the construction. Slajz was also the place which denizens of Becej remember as the location of the first waterpolo games.

Slajz remained in use until 1975 when it was declared a monument of cultural significance.

Another interesting construction that was the pride of Becej and is also attributed to Gustave Eiffel is the Eiffel house in the central town square which citizens claim was designed by him. This is actually a house belonging to the Apfel family which was constructed around the end of WWI, but due to the fact that the surnames sound similar in Serbian, this rumor was born.

The best way to end this story about Eiffel in Serbia is to mention the engineer Milos Savicic, once the wealthiest Serb and mayor of Belgrade.

The talented Savicic was born in 1865 in Svilajnac and his education led him through Belgrade and all the way to Munich where he graduated from the higher technical school. After completing his studies he became the construction engineer working for the Bavarian railroad.

His successful career in Germany comes to an end after only two years when he was forced to return to his homeland due to his mother's illness. In Serbia he was greeted by an invitation from Eiffel himself to join his construction buerau which was preparing to begin constructing the Eiffel tower. Sadly due to military service obligations Savicic had to refuse the invitation and stay in his country.

This is where their paths diverged and each of these talented constructors went on to build amazing constructions which heralded the second industrial revolution with their appearance and functionality.