Artistic freedom or a medieval mystery: space aliens in a Visoki Decani fresco?!

The monastery Visoki Decani was constructed by king Stefan Decanski and emperor Dusan. The final brick of the construction was laid in 1335, while the frescos took another 15 years to fully paint. What's interesting is that all the fresco painters were unknown except for one who signed his name as "sinful Serdge".

It is believed that the Visoki Decani fresco paintings are one of the most valuable Renaissance examples of Byzantine painting and an important record of life in the 14th century. The frescos faithfully depict everyday use items from those times as well as historical figures and events. This leads us to one fresco in particular which many ufologists consider proof of alien life.

Spaceship, stars or something else

The fresco in question is the "Raspece Hristovo" (the crucifixion of Christ) which depicts Jesus Christ on the cross, surrounded by his followers. Around him there are angels in flight, while in the corners of the fresco there are two odd objects which gave birth to much speculation.

Namely they have an aerodynamic shape and look somewhat like flying crafts with a single human figure in them each.

On the one hand, some ufologists believe that these are depictions of space travelers while experts in Byzantine art state that these are actually allegorical representations of the Sun and Moon in human form. This kind of artistic expression was used to show the tragedy of the Christ's crucifixion which was felt even by the heavenly bodies.

On the other hand, there are those who believe the truth lies elsewhere still. For example, Erich fon Däniken, the Swiss author of several works claiming that alien intelligence had a hand in early human cultural development, claims that there is no doubt that the fresco in question depicts aliens.

Däniken has visited Visoki Decani and has deemed that the two odd objects are in fact "angels inside spaceships".

Ever since Däniken's visit to the monastery, the ufologists around the world have been using this fresco to support their claims of there being life outside earth. It is even mentioned in the History channel's TV series "Ancient aliens". 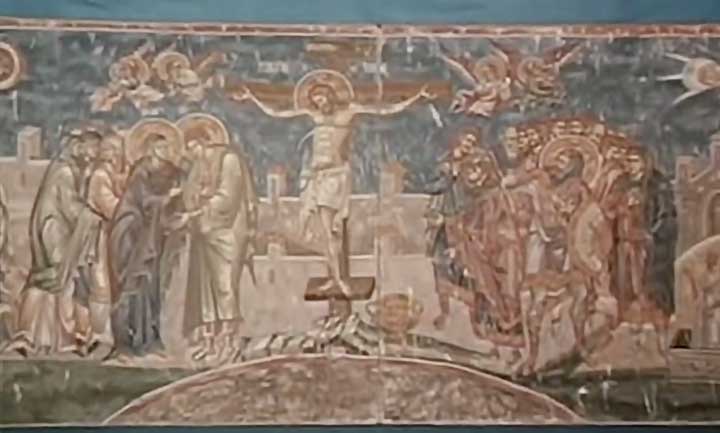 The idea that the odd objects depicted in the fresco "Raspece Hristovo" were actually space ships was stated for the first time in the newspaper publication "Sputnik" in 1967. This publication was issued by the Russian emigration in France. In an article titled "Visitors from the cosmos", Vyacheslav Zaytsev lists reasoning and proof supporting the theory that certain art pieces are actually proof that the Earth was visited by extra-terrestrial entities.

In the part that mentions the Visoki Decani fresco, Zajecav says:

"The shape of both crafts is aerodynamic and both can easily sustain a jet propulsion system. Other angels who are looking on are covering their eyes and ears and recoiling in fear that they might go blind or deaf because of the force of the crafts.

The section below depicts two groups of people whose faces betray emotions of confusion, fear and panic. In the middle of the composition is Jesus Christ on the cross. The image of the Christ’s resurrection under the crucifix image is no less surprising.

The Messiah is standing inside a rocket ready to launch. The similarity of the depicted rockets to those known today is perfect, especially taking into account its two stabilizers.

With his right hand, Christ is attempting to raise up a man who had fallen on the ground, probably due to the rocket's landing or taking off towards the kingdom of heaven."

The Visoki Decani monastery houses the remains of St. Jelena of Decani, daughter of king Milutin and sister to Stefan of Decani. According to an old legend, when the Turkish army conquered the area in 1692, they attempted to turn Decani into a mosque. However, they failed to do so because incredibly forceful flames rose up from the tomb of St. Jelena, stopped their army and preserved the temple.

Whether this too was an intervention by the aliens or just an old legend, we will probably never know.